Thri-Kreen are an interesting race of psionic, mantis-like humanoids with four arms and a hard exoskeleton.

No one here at Black Citadel is really quite sure how they made it through Quality Control, but the multiverse is a weird place, so we roll with it.

Back in the old days of Dungeons and Dragons 3E and 3.5E, the Thri-Kreen were originally a creature in the Monster Manual.

When the Psionics Handbook came out, they were featured as a playable race next to the githyanki, githzerai, xeth, and half-giants.

Since then, the Thri-Kreen have found a place among space-faring adventure games like spelljammer and starfinder, though you will know them by different names. The multiverse, after all, takes intellectual property quite seriously.

Though in Dungeons and Dragons 5e the Thri-Keeen are a monstrous race with no official playable support, it is possible to find homebrew versions online.

Therefore, at the end of this piece, you will find the official Black Citadel homebrew option for Thri-Kreen as a playable race. 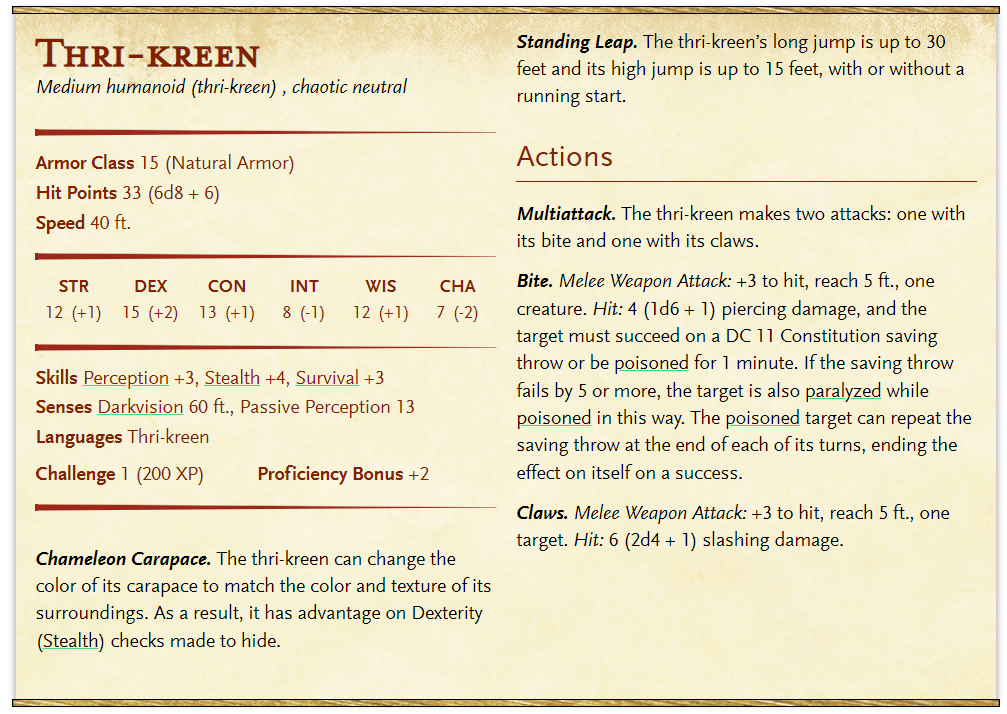 There isn’t much lore presented in 5e on the various ways and methods your party could interact with the Thri-Kreen, excepting of course the reality that they will most likely weigh the pros and cons of eating you before any other interaction occurs.

You are likely to find them in the deserts and savannas of the world, subsisting on what they can grow or hunt.

Given their predilection toward elf flesh, you may find a hunting party on their way to an elf village or even tracking the elf in your party if you have one.

Furthermore, communication will be limited, unless there happens to be a telepath in your party or theirs. From the Monster Manual:

Thri-kreen employ a language without words. To show emotion and reaction, a thri-kreen clacks its mandibles and waves its antennae, giving other thri-kreen a sense of what it is thinking and feeling.

Other creatures find this manner of communication difficult to interpret and impossible to duplicate.

When forced to interact with creatures of other intelligent species, thri-kreen employ alternative methods of communication, such as drawing pictures in sand or making pictures out of twigs or blades of grass.

Thri-kreen experience the full range of emotions but aren’t as prone to emotional outbursts as humans.

Thri-kreen with psionic ability often demonstrate a wider range of emotions, particularly if they live near or interact with humans or other highly emotional creatures.

Thri-kreen consider all other living creatures as potential nourishment, and they love the taste of elf flesh in particular.

If a creature might be useful for something other than food, the thri-kreen aren’t likely to attack it on sight. Thri-kreen kill to survive, never for sport.

Given this dearth of information, we have created a Thri-Kreen society below for you to drop into your campaign just for your players.

Hive of the Mound

The Mound is a small mountain in the middle of the flat plain that conjoins the desert with the grasslands. It is oblong, several miles across, and a thousand feet high.

In this Mound is a hive of Thri-Kreen that keep their homes, larders, and nurseries deep within.

Their society exists on top and within the Mound, going deep into the earth where the Thri-Kreen make use of their darkvision and silent communication.

The Mound is led by a Cabal of Psionic Thri-Kreen.

Any Thri-Kreen who develops psionic abilities is automatically drafted into the Cabal and placed at leadership roles throughout the hive – everything from food and resource management to military leadership.

This particular hive is hemmed in on two sides. In the desert there lives an emerald dragon who routinely lures and eats hunting parties.

Underground, a mind-flayer cabal uses an extensive tunnel network to also lure away Thri-Kreen and use them as food and thralls.

While the Hive is prepared to accept these losses and manages breeding accordingly, herein lies a situation you can use as a DM for your players.

If you wish to use the Hive of the Mind, consider this story seed.

The party is first engaged by a hunting party which will most likely not have a psionic member.

The objectives of a hunting party are simple: if it moves, bring back to the hive alive, if possible. It stays fresh for longer if it’s alive.

If it is impossible to get your players into the hive alive, have the hunting party accompanied by a psion.

If the party finds its way into the hive, they will be questioned by a psion to determine their usefulness. Luckily, the hive has a need that an adventuring party could take advantage of.

Either the dragon or the mind flayers mentioned above recently lured away a powerful Thri-Kreen psion who is said to contain some of the knowledge of a powerful psionic artifact that explains the origin of the Thri-Kreen and, if used, can be used to mentally link all of the Thri-Kreen in a 100-mile radius and bring this hive mind under the control of the wielder.

The Thri-Kreen are prepared to go to war to retrieve this psion, but if they do, then they will leave their home exposed to either the dragon or the mind flayers.

The Thri-Kreen feel it is best if the players can go and either retrieve or kill the psion before the information is given away.

The psion was not lured away but is instead in a meeting with both the mind flayers and the emerald dragon.

These three hope to exchange what knowledge they have to find the artifact and, with a Thri-Kreen army, bring all psionic races together to form a world society where psionics has crushed arcane and divine magic and created a new utopia.

Look at what the good blacksmiths here at the Citadel have crafted for you!

Thri-Kreen characters tend to find themselves as either scouts for their hive searching for new homes or as the lone survivor after a devastating disaster.

Occasionally there may be a Thri-Kreen who just didn’t get along with the rest of the hive or is plagued with an insatiable curiosity, but as a hive-oriented race of creatures, this will be quite rare.

Despite being born with four arms, Thri-Kreen can not wield extra shields or weapons in combat without extra training.

In combat, most Thri-Kreen tuck their smaller arms out of the way or use them to hold tiny objects safely.

Thri-Kreen have no ability score adjustments.

Thri-Kreen can understand languages normally, but can not speak them.

The hard exoskeleton of a Thri-Kreen grants a base armor class of 13 plus your Dexterity modifier.

Because of this exoskeleton, however, the Thri-Kreen have no ability to wear armor, though shields and magical bonuses work normally.

In addition, you can change the color of your carapace to match your surroundings, granting you advantage on Dexterity (stealth) checks made to hide.

Because of your multifaceted eyes, you can see in dim light within 60 feet of you as if it were bright light and darkness as if it were dim light. You can’t discern color in darkness, only shades of gray.

Your long jump is 30 feet and your standing jump is 15 feet with or without a running start.

You have a Melee Bite attack, which uses your Strength modifier and deals 1d4 damage.

The target must succeed on a Constitution saving throw of DC 8 plus proficiency modifier plus your Constitution modifier or be poisoned for 1 minute.

If the DC fails by 5 or more, the target is also paralyzed while poisoned. The poisoned target can repeat this saving throw at the end of each of its turns, ending the effect when successful.

Some Thri-Kreen have developed abilities that set them apart from the majority of their kin.

You have mastered the use of all four limbs in combat. This grants you multiple options, of which you can use one at a time. In addition to your normal abilities:

Using your Wisdom modifier you may cast the following spells with no material components:

At will: mage hand (the hand is invisible)

1/day: invisibility (self only)

I played the game a lot as a kid, back in first edition.  Over the past few years since 5e was released, I’ve really started getting back into it. Currently, I run a campaign online for some friends and my brothers, and we also play a side-sesh just to mix things up.