I don’t know if there’s any D&D campaign that’s managed to completely avoid battle. That would be pretty crazy right?

Combat is one of the three pillars of gameplay, so it tends to come up quite frequently.

I’m pretty sure that most of us like to walk out of combat alive. Understanding damage types and the many ways creatures and characters can relate to them is key to making sure you’re not forcing your allies to cast Revivify after every battle.

In this article, we’re going to give you an overview of resistances, immunities, and vulnerabilities, along with a discussion on the frequencies of these and how to plan for them as a player or as a DM.

What is Damage Resistance in DnD 5e?

Resistance to a damage type means that you take half damage when you’re hit with damage of that type. You can gain resistance against a damage type, a source of damage, or a specific instance of damage. As always in 5e, when you divide the damage by 2, you’ll round up.

The calculation for damage resistance happens after all other modifiers are applied. That is, any additional damage bonuses beyond just the roll of the dice. Also, resistances to a specific instance of damage don’t stack.

Perhaps you have resistance to poison damage as a dwarf. If you drink a potion of poison resistance you gain no additional benefits. That damage isn’t halved and then halved again, and you most certainly don’t receive immunity.

Damage resistances are one of the most common relationships to damage that we’ll come across in 5e. A lot of creatures, especially higher CR ones, will have at least one damage resistance sitting in their stat block. Of course, there are also plenty of ways to pick up resistances as a player character.

Some races such as dwarves and tieflings have resistances thanks to their racial features. Most resistances will come from a class feature though.

One of the best out there is the 3rd level bear totem ability from the path of the totem warrior barbarian. Incredibly early on this feature gives you resistance to all damage except psychic. Insane? Maybe. Amazing? Definitely.

What is Damage Immunity in 5e?

Damage immunity means that you take no damage of a specified type. While this is not defined anywhere in any 5e sourcebooks, we default to the dictionary definition for clarity. I also follow the sage advice of Jeremy Crawford here.

Immunity is rather interesting since it doesn’t have a 5e official definition. It’s shocking that we don’t get one, considering it’s all over the place. Immunity, like the other damage modifiers, isn’t just limited to creatures and players.

You can find immunity on magical fortresses, ships, items, and basically anything that you can deal damage to. So… anything.

Damage immunity is a mechanic that is extremely absolute. Immunity to fire damage means you take no damage from fire, end of story. Magical fire, flaming swords, lava; no matter what flaming damage comes your way, you’ll be fine. If you can get your hands on this, even temporarily, it’s a game changer.

There’s also the mention of condition immunities. While this is separate from damage, it’s worth talking about a bit while we’re on the topic. Condition immunities function in much the same way, hypothetically. Again, there is no standardized definition floating around in our sourcebooks, so it’s really up to DMs discretion.

I mention that because the line between condition and damage can sometimes get fuzzy. If part of a smothering vine’s restrained condition means that you would take 2d6 bludgeoning damage and you have immunity to bludgeoning damage, you take no damage.

This does not mean you aren’t still restrained unless you also have a condition immunity to being restrained.

Note that the verbiage is normally different: “you take x points of poison damage” does sound different than “you are now poisoned.”

What is Damage Vulnerability in 5e?

As the inverse to damage resistances, vulnerabilities are either amazing or god awful. It all depends if it’s on you or your enemy. One thing that needs to be made very clear is that the doubling effect applies after all other modifiers.

Why exactly we double the dice for crits and double the damage for vulnerabilities probably has a lot to do with game theory that I’m unaware of. However, that bit I mentioned about vulnerabilities being calculated after resistances is enough reason for me.

Now, you may be thinking, how could someone be vulnerable and resistant to the same source of damage. Well, you could receive a resistance or vulnerability from a potion or magical effect, causing the two to virtually cancel out if you already had the opposite from a racial or class feature.

There is an alternative though. The damage could be two types at once. More on that in the next section.

If you come across a feature that grants “immunity to poison” without specifying the condition or damage, it grants immunity to both. This is most commonly brought up with the monk’s 10th level feature “Purity of Body.”

While magical damage is not a “type” of damage per say, it is a quality that damage can have. It’s also something that both player characters and creatures can have resistance, vulnerability, or immunity to. The same goes for nonmagical damage.

This sort of extra damage quality is the source of most instances where a target has conflicting resistances and vulnerabilities. Let’s say my barbarian has resistance to bludgeoning damage while they’re raging but becomes afflicted with some disease that makes them vulnerable to magic damage.

If they get hit with a magical hammer for 2d6+3 magical bludgeoning damage, we’ve entered the conundrum.

Fortunately, it’s pretty easy to solve. We calculate the raw damage first, let’s say it comes out to the average of 11. Then, we first calculate resistance to bludgeoning, cutting that in half and rounding down to 5. Next, we factor in the vulnerability to magical damage, ending up at 10 damage total coming at us.

As you see, we lost a point of damage there. What about immunity though? That’s actually really easy because immunity just tells us that we take no damage.

We come across a lot of higher-level fiends, elementals, and even undead that have resistance to nonmagical bludgeoning, piercing, and slashing damage. The solution to this for a martial character is to pick up a magical weapon, or to have your spellcaster enchant one of your weapons with Magic Weapon.

Very much in the same vein as magical or nonmagical attacks, some creatures even have extremely specific relationships with damage types. One such creature is the Jabberwock from The Wild Beyond the Witchlight. It has vulnerability to slashing damage specifically dealt by a Vorpal Sword.

Here are some other rare instances that are basically just fun to know about and not super necessary for your battle preparation.

Piercing from magic weapons wielded by good creatures – This can be found in Rakshasas, humanoid fiends with the heads of tigers.

Piercing, bludgeoning, and slashing damage that aren’t silvered – A pretty substantial group of fiends, some undead, and even Hellfire Engines have built up a strong resistance to the physical damages, but haven’t figured out how to get around silver.

Piercing, bludgeoning, and slashing damage that aren’t adamantined – If you want to hurt gargoyles and living statues, you’ll want an adamantine weapon. Maybe call up wolverine? (I know that it’s adamantium in marvel, cut me some slack)

The above resistances – If something is strong enough it just might be immune to unsilvered or unadamantined weapons, beware.

Bludgeoning, piercing, and slashing from metal weapons – The Lava Children are like nightmarish versions of the Heat Meiser’s minions, and they do not care about metal at all. They can walk through metal doors as if they weren’t there, make attacks against metal armor with advantage, and obviously, they’re immune to metal weapons.

What are the most common resistances in 5e?

Being prepared for combat means knowing what resistances you’re going to be squaring off against. While the in-depth answer is a bit more nuanced, cold, fire, lightning, and poison damage are the types most likely to be resisted by your foes.

DISCLAIMER: Everything we discuss in this section assumes that creatures are chosen at random, and that you have an equally likely chance of going toe to toe with any enemy.

This should be taken with the biggest grain of salt, since the enemies we face are chosen not only by our DM, but also by the settings we find ourselves in.

An urban campaign will see a far different group of foes from one set in the Underdark. Keep this in mind as you read on.

Below you’ll find a glorious list. It is a list of all damage types, including the “type” of nonmagical bludgeoning, slashing, and piercing attacks, with a headcount of all the resistances, immunities, and vulnerabilities present in 5e creatures. Look no further, this is the master list if you want to know how common a resistance is.

For those of you that are a bit more visual, here’s a nice little chart I put together comparing all of that data. Keep in mind, poison immunity goes way above the bounds of this graph, and if the graph went up to 531 we’d barely be able to see any vulnerabilities. 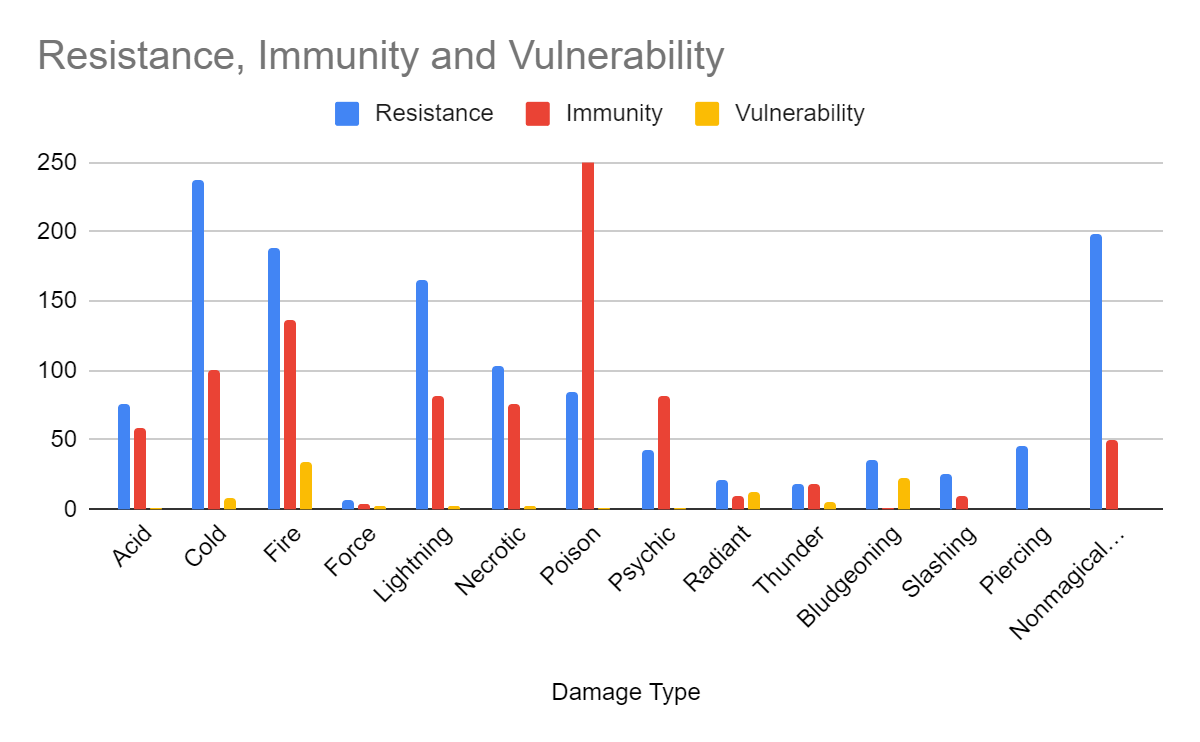 All of this tells us paints a really good picture of which damage types to avoid carrying around and which ones to stock up on. Thunder, psychic, and force are going to be your most reliable forms of damage out there. You’re also doing pretty good with the physical damage types, so long as they’re magical.

What we see here is actually pretty balanced by which damage types we deal out. Most of the stronger spells are going to be more commonly resisted. That’s why subclasses like the Soulknife rogue who always has a psychic damage dealing blade ready to go are so sought after.

Another great class to get around damage vulnerabilities, possibly the best, is the Order of Scribes wizard. Their second level feature Awakened Spellbook lets them temporarily replace the damage type of a spell with a type that appears in another spell in your spellbook.

This means being able to cast wildly powerful spells like Fireball with a damage type that’s not just going to get deflected by an Adult Dragon.

What are the best resistances to have?

The best damage types to have resistances against are fire, poison, and the physical damage types. These account for the most common damage types dealt by creatures and by spells which any rival spellcaster could throw at you.

While having resistance to those damage types is going to yield you the best results, resistance to any damage is useful. As a DM, it’s important to throw a good mix of enemies at your player’s characters so that they get the opportunity to see value in any resistances they might have.

There’s a delicate balance to be struck between pandering to a character’s resistances and avoiding them all together. Use your intuition.

How to Get Resistances in 5e

You can get resistances from racial or class features, magical items, or even some spells. Below are some common or impressive sources to grab up resistances.

Keep in mind that this is nowhere near an all-inclusive list, but we may have one of those in store, so check back soon, or keep your eyes peeled for a link at the bottom.

Many of these have additional effects.